Large succulent plants outdoor – Succulents in the yard that are dramatic and weird lend themselves ideally to the enhancement of modern architecture. These plants, which were formerly restricted to the rock garden, are now becoming more popular in and around contemporary dwellings.

Using the many different species of succulents in flower borders will offer a succession of blooms as well as a continual source of interest and enjoyment in the garden. Some of the most uncommon varieties, such as the “Desert Roses,” are highly regarded as “oddities,” and many succulent collections equal those of orchids in terms of aesthetics.

There are no other plants in the whole world that have such bizarre shapes, such exquisite blossoms, or that have been so ingeniously adapted to such a difficult environment.

“How to care for succulents outdoors” is a question that many people who are new to the world of outdoor succulents have.

Succulent plants may be cultivated and utilized effectively outside in a variety of ways, including:

Instructions on How to Water Succulent Garden Plants

When selecting a location for growing succulents, look for a sloping area with well-drained soil as the best option. Cactus soil mixes and succulent soil mixes should be light in texture and composition.

Compacted clay soil should be treated by adding large amounts of sand or by incorporating a large amount of sponge rock or coarse gravel into the soil. Surface rot may be prevented by applying a top dressing of fine rock, such as gravel or marble chips, to the surface of the concrete.

If you are growing succulents outdoors during a time of acute drought, you will need to provide them with a constant supply of water—one big soak is preferable to multiple little sprinklings.

However, if they are being grown in a container, they will often need more regular watering due to the constricted root system and the fact that the potting soil in containers dries up much more quickly.

When Succulents are actively developing in the Spring and Summer, they need the most water, with the requirement for water diminishing dramatically as the chilly Fall weather draws closer. Winter watering should be sufficient to prevent the plants from becoming shriveled and dying.

Even while overwatering and underwatering may both be detrimental to the plant (both extremes may result in the plant’s death), it is preferable to err on the side of caution and water the plant too little rather than too much. Therefore, if you are unsure, refrain from watering.

What Kind of Light Do Succulents Require?

A sunny site is generally required for most cacti and other succulents, but epiphyllums and sempervivums like partial shade. The majority of them will also need protection from the chilly wind. Generally speaking, a southern exposure against a house or a fence is the best.

Some plants grown in pots are unable to withstand the direct rays of the sun because of their limited root system. This is due to the fact that their roots are restricted. Aside from that, less hardy succulents that have spent the winter indoors are often in a delicate state and are easily damaged by direct sunlight.

However, desert cacti, which are usually covered with long spines (for example, the prickly pear – Opuntia), are more resistant to the effects of strong sunlight, even though they have spent the winter indoors.

It is possible for these “limited sun” plants to become sunburn if they are overexposed to the sun (a yellow or white spotting). An appearance of scalding or scorching is present on the affected area of the plant when this condition occurs. It occurs on the upper or southern side of the plant.

How Much Fertilizer Required for Succulents?

Desert soils are often quite rich in nutrients. This is shown by the fact that, after they have been recovered, they often need just water to be productive again.

Cottonseed meal, often known as hoof and horn meal, is one of the greatest fertilizers for succulents. When growing succulents, avoid using fertilizers that contain a lot of nitrogen. Nitrogen stimulates growth and leads to the over-development of soft tissues, both of which are detrimental.

When manure, guano, and other fertilizers were readily accessible in large amounts, it was highly urged that they not be used on succulents. This was especially true in the past. Similarly, the majority of soluble liquid plant fertilizers that garden plants need contain an excessive amount of nitrogen for succulents.

How To Take Care Of Succulents During The Winter

Almost any Succulent may be cultivated in any area of the nation if it is planted in a container and brought inside when the weather turns cold. The restricted root system of cacti and other succulents allows them to thrive in containers, and this is especially true for them.

Growing succulents outdoors in cold climes is also viable, and many varieties may survive in the ground for an extended period of time provided proper care are followed.

It is important to take safeguards not just against the cold, but also against other variables that may be experienced in Eastern or Midwestern gardens, such as standing in moist soil for extended periods of time. These additional causes are often the true causes of the plant’s demise, for which freezing is mistakenly blamed, rather than freezing itself.

Prickly Pear, Sedums, and Sempervivums are examples of hardy Succulents that can tolerate temperatures as low as zero degrees Fahrenheit and even slightly below.

It is recommended that succulents be brought inside when the temperature drops below 32° degrees Fahrenheit, unless they are one of the hardy varieties mentioned above.

These sensitive succulents that need indoor overwintering include many Echeveria plant kinds, Epiphyllum, and Kalanchoe, among others (donkey ear plant).

As previously noted, the first and most essential guideline in growing Succulents is to start them out in a sloping location with sufficient drainage to ensure they have the best possible start.

Second, succulents should be “toughened” in the fall by reducing the amount of water they get. Many Succulents can withstand being blanketed by Winter snow in their natural environment because they have gotten so hardened over the long, dry, resting time that precedes the onset of Winter.

When it becomes cold outside, cover your outdoor succulents with paper bags that are big enough to cover them completely but not touch them. Because the air gap acts as insulation, multiple layers of newspaper or straw wrapped over the bigger plants will also help to prevent any harm from occurring.

There was a time when enormous outdoor plants were kept frost-free by using orchard burners, which heated and circulated the air across the whole area; nowadays, gigantic fans accomplish a similar effect.

When overwintering sensitive succulents (or hardy succulents if the temperature goes much below zero), it is advisable to put them in a dry, well-lit area such as a heated sun porch to ensure that they do not get damaged. Ideally, the temperature should be maintained between 40 and 50 degrees Fahrenheit.

Large Succulent Plants and How to Propagate them

When it comes to cultivating succulents, the simplicity with which these plants may be reproduced is perhaps the most enjoyable aspect. Taking your own cuttings and using the leftover plants as trade material is a simple process that will help you build up your collection over time.

Additionally, you may spread your passion for a rare species by providing cuttings to your friends for them to root. Purchasing specimens from a reliable garden merchant is another way to ensure that you have a well-rounded and diverse collection of plants.

The majority of succulents self-regenerate, meaning they do not need any help from their owner. A bryophyllum collector, for example, will quickly get overwhelmed with the influx of new plants.

Succulent plant-lets are generated on the edges of the leaves while the mother plant is still connected and developing, and they take root and grow when they fall to the wet soil below the surface of the water.

The leaves of falling succulents will take root and grow regardless of whether they are planted or not, provided that the soil is kept wet.

When the stems or leaves are chopped into pieces, the cuttings should not be planted immediately after they have been prepared. Keep them in the shade and in a dry location until the wound has healed and the roots have begun to develop.

Unless the plant is a succulent, most plants will quickly wilt and die, but succulents will rot if the cut is not well healed before it comes into contact with soil. The stems may shrink somewhat from time to time, but this is quite harmless.

It is possible to put the cuttings on dry sand in the shade after one to three weeks. Take care not to bury them and water them only when absolutely necessary.

Milky-juiced plants that do not root easily may be fastened to a stake and hanging with the stem end just touching the sand to avoid rotting.

With the exception of the shade-loving kinds already mentioned in this article, move the plants to a sunny location after they have established themselves.

Those plants that produce offsets are, of course, the easiest to divide, and there are a lot of them among the succulents to choose from.

Several little plantlets grow around the base of the mother plant, and if they have not yet established a distinct root system, they may be readily detached and planted.

Since Succulent seeds, for the most part, behave similarly to seeds of other plants in that they need moisture to germinate, propagating Succulents from seed is far more time-consuming and complex than propagating other plants.

Young Succulent seedlings need to be shielded from the sun and provided with some nutrition to thrive. In general, a good porous planter mix that has been fully wet is the most effective medium for efficient germination.

Because steep hillsides are being used as construction sites more and more often, many people are discovering that dry walls are an economical solution to maintain steep banks.

Due to the fact that water is the most common challenge faced while taming a steep slope, the retaining wall should be regarded as an artificial dam that may be necessary to keep water at pressures equivalent to the slope’s height.

If you wouldn’t try to construct an 8-foot dam on your own, don’t try to build a comparable retaining wall without expert assistance.

The most effective construction for controlling a steep slope is not a retaining wall, but rather a wall with open joints between the bricks.

Instead of trying to direct or control the water, such a structure prevents water pressures from building up, and it may be constructed without the assistance of a trained professional.

Rough stone, boulders, a lattice of concrete or wooden connections, all of which have soil seams that may be planted, are all excellent choices for garden structures. It is also possible to utilize concrete or cinder blocks, which should be set edgewise on the slope with the open end facing outward.

The initial layer should be made up of the biggest rocks possible, which should be chosen so that they fit together tightly and with their widest side facing down. After that, good cactus soil should be tamped around the rock and the appropriate succulent species should be placed there. 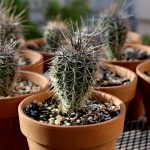 Arizona Cactus Varieties & How to Care for Arizona Barrel Cactus